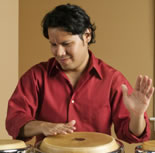 A native of Peru, Edgar Valenzuela is one of the most versatile young musicians in North Texas with activities that go from playing in symphonic orchestras to salsa, jazz and world music ensembles, both as a percussionist and as a violinist.

He was raised in a family of musicians, starting his formal musical education at the age of 6 under the tutelage of his father. At eight, he was admitted into the Josafat Roel Pineda Conservatory in Lima as a clarinetist. He eventually switched instruments graduating with honors in violin and music education.

His musical interests have led Edgar to perform in diverse music festivals in Latin America, Europe and the United States, with a mixture of classical, popular, traditional Latin American and Jazz. Some of these festivals include performances with well-known conductors and musicians, among them Abelardo Vasquez, Alex Acuña, Vinnie Colaiuta, Eduard Melkus, and Gustavo Dudamel.

Since 2001 Edgar has been a resident of Fort Worth, where he is a member of the Latin Jazz trio Lunazul and director of the band Mambo Machine. Some of his most recent activities include a solo performance with the New Irving Philharmonic Orchestra as percussionist and arranger, and a performance, as a violinist, for the Van Cliburn Foundation in a concert series dedicated to Tango music. His immediate future projects include a tour as a percussionist for Phil Collins and a series of concerts and recordings as a member of Caminos del Inka , an ensemble dedicated to promote Latin American music, directed and organized by Maestro Miguel Harth-Bedoya.

Edgar is currently finishing graduate studies on violin with Martha Walvoord at the University of Texas at Arlington and takes conducting lessons with Sergio Espinosa, David Itkin and Miguel Harth-Bedoya. As an educator, Edgar has worked with the Fort Worth ISD as well as many other music schools in the DFW area.

It’s not too late to register!
Please contact to enroll today.

We're not around right now. But you can send us an email and we'll get back to you, asap.

Registration at AHMA is for the school year. For your convenience, a nine-month payment plan is available. Our automated payment system withdraws a monthly payment from your account or charges your credit card on the 2nd of each month (September through May) or once a semester. Early withdrawal before the end of a semester does not terminate responsibility for payment of tuition. (See withdrawal policy below.)

A 30-day notice is required for early withdrawal. One of the two following conditions will apply: (1) Refunds for withdrawal from classes during the semester will be limited to the tuition for remaining classes minus four week’s tuition. (2) For those making payments in quarters, one payment will be due upon withdrawal.

Parental supervised practice is of utmost importance! Parents are partners in the learning process. Gentle encouragement is needed for the student to feel the delight of successful learning. It is very important that a student feel successful at the tasks he or she is attempting. Please encourage daily practice. Younger children should not be expected to do all of their practicing alone. Sing songs together, practice rhythm and note reading exercises together, practice the assigned pieces together. Try to set aside the same time every day for practice sessions, and make it a goal to practice each piece multiple times each day. Practice time is rewarded through our Practice Points program. Students can receive small prizes throughout the year, and end-of-year awards are also given out.

Bad weather closing of AHMA will coincide with Fort Worth ISD. Information on school closings is available from radio/TV. Due to scheduling difficulties, bad weather days cannot be made up.

Students and parents arriving early should enter through the front entrance and wait for their class in the waiting room (foyer). Parking is available in front and behind the school. Please do not park in the driveway! This blocks students and parents who wish to park in back from entering and exiting.